Gujarat has some of the most important historical monuments and forts which are still strong and resemble our culture and architectural marvel. Originally built by Chandragupta of Mauryan dynasty in 319 BC, the fort lies in the middle of the town on a plateau. Over a period of 800 years the fort was invaded 16 times and still stands strong and tall. The fort has been ruled by many rulers and has gone through the hands of Hindus, Muslims, Jains, Buddhists, British and Nawabs. The fort has all necessary resources like water tanks and wells, storage for food grains, temples and roads. After Chandragupta, the fort was used as Buddhist caves between 2nd and 4th century. On a boulder near the fort fourteen Edicts of Ashoka can be found which are carved in Brahmi script. The caves here also have floral work and stone carvings dating back to 500 CE. 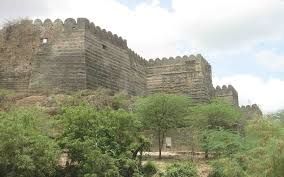 The fort was used till 6th century and was later abandoned till 9th century and was rediscovered in 976 CE when the Chudasam dynasty gained control over the region. The chudasamas ruled Junagadh quite for a long time than any other rulers and realized the defensive importance of the fort. During their period the fort was transformed into a impregnable fortress with walls as high as 65 feet and with a 300 feet deep moat around the compound wall with crocodiles in it. After Chudasamas, Navgahan Kuva ruled the area till some part of 12th century. After that the fort and the region was ruled by Raja Rakhengar who married Ranakdevi. Later Siddhraj Jaisinh, Solanki ruler invaded the city for Ranakdevi, beheaded Raja Rakhengar and captured Ranakdevi. Later the Jungadh was ruled by Raja Mandlik III till 1473 when Muhammad Begada invaded and captured the Junagadh city. From 1473 the rule of Mughals ended till Indian attained Independence in 1947 and Uperkot and Junagadh became a part of India after 1949 when the princely rule was stopped.

The Uperkot fort is an architectural marvel and is a nice place to visit. 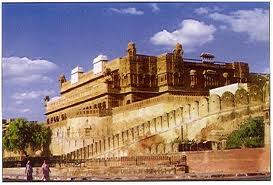 The old Buddhist caves in the fort were later used by Ranakdevi as her palace. The caves were very old and have well decorated pillars with doors, windows and meditation cells. The caves are the best place for meditation, learning and ideal place for solitude. The caves have three tiers and even the lowest one have good light and reflects the way it was built technically. Apart from them there are also Khapra Khodia caves and Baba Pyara caves in the fort. The baba Payara caves have a architecture related to the Satavahanas period  between 1st and 2nd century A.D.

The Khapra Kodiya Caves have two important components of which the western wing with a grid pattern and the other is a L shaped wing which is used as an habitation apartments. The Khapra caves date back to 3rd – 4th century A.D. Navghan Kuwo, a deep well with footsteps dug during the period of Navghan-I, Chudasama ruler can be found inside the fort.
The Uperkot fort is true blend of Hindu Chudasama rulers and Muslims Mohmud Beghda rule. There are two cannons on the fort which also tells us about the history. One of the cannon Nilam, which is 15 feet long, is made in Egypt in 1531. There is another cannon Manek, both were brought from Diu. The darbarhall in the fort, which is now a museum, is a showpiece. The museum now is house for various valuable like silver plated thrones, chandeliers, collection of howdahs and palanquins etc.
The place is worth visiting for those who has interest in history and the visiting hours are from 7AM to 7PM.