Mahabat Maqbara is one of the major tourist attractions in Gujarat and especially in Junagadh. Mohabbat Maqbara is once a palace used by the Nawabs of Junagadh as their home and was built in 1892. The construction was started by Mahabat Khanji in 1878 and was completed by his successor Bahadur Kanji in 1892. Mohabbat Maqbara Palace is also called as the Mosque of Bahaduddinbhai Hasainbhai and is one of the most important historical monuments in Junagadh. 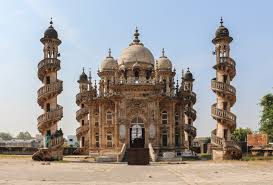 Design and Architecture of Mohabbat Maqbara

Mohabbat Maqbara is the most beautiful palace with great architecture of all the palaces built in 19th century across Gujarat. This is one of the oldest Moghul monuments and is house for tombs of Bahauddin Maqbara and Mohabbat Khanji of Bahaduddinbhai Hasainbhai, vazir of Nawab Rasul Khanji. The architecture of the tomb is a blend of Hindu, Islamic and European architectures. Bahauddin Makbara was constructed by Sheikh Bahauddin with his own funds during the period A.D 1891-1896. The monument is located inside the city in a very busy area. 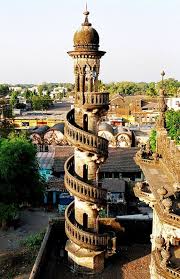 The place has two complexes, an older one and another new one. The older complex has a remarkable architecture with stone carvings, vertical columns, dedicated carved columns, cornices, arches and domes. The portals are decorated in silver and the onion shaped dome is a splendor to watch. The dome or complex has four minarets on the four corners with pirouetting spiral staircase. The minarets have rich stone carvings and large silver doors. There are also a number of Haveli’s inside the Maqbara which have the best wood carvings and jharokhas which resemble the Gujarat domestic architecture. The old monument is a combination of Gothic and Indo-Islamic architecture. Mohabbat Maqbara is not accessible to general public and can be accessed from the mosque beside the mausoleum.

The Jama Masjid is located adjacent to the mausoleum while Vazir’s maqbara is located on the other side. The monument stands strong and steps needed to be taken to pass on the rich heritage for the next generations. The architecture and the expertise of building the monument makes it more magnificent attracting more visitors. Mahabat Maqbara is also a part of famous tales of 1001 nights. The monument is situated in the main city and is easy to locate. Also there are a number of hotels and shopping places near the monument to spend more time and take rest.

How to Reach Mohabbat Maqbara

By Air: The nearest airport is at Rajkot which is just 99 kilometers away. There are frequent flights from all major cities in India.

By Road: Junagadh is well connected to all major towns in Gujarat and has good transport facility. As Jungadh is a historical town, buses frequently ply from all part of the state. Junagadh is 99 kilometers from Rajkot, 184 kms from Jamnagar, 54 kms from Sansar Gir, 88 kms from Somnath and 327 kms from Ahmedabad.

Best time to Visit
The best time to visit Junagadh is between October to April when most of the tourist locations/spots are open.