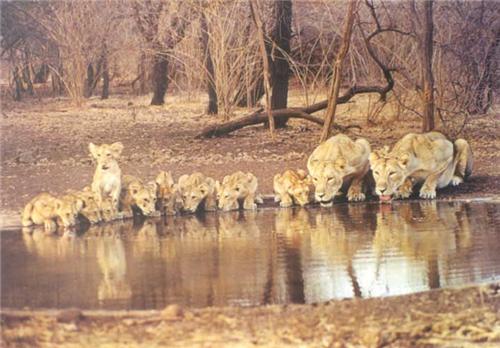 Stretched over an area of 1412 km² of which 258 km² area is fully protected area while the remaining 1153 km² is for sanctuary. Gir forest area is located in Junagadh district of Gujarat and is 65 km from Junagadh Town and 43 km from the town of Somnath. 7 major rivers Shetrunji, Hiran, Shingoda, Datardi, Godavari, Raval and Machhundri flow through the Gir region. This area also has 4 reservoirs of which Kamleshwar dam, 'the lifeline of Gir' is the most important one.

The Gir forest is home for the Asiatic Lions. Also 507 different plant species can be found in this region. Apart from lions and plants the region is also home for 2,375 distinct fauna species which include 300 species of birds, 38 species of mammals, 37 species of reptiles and more than 2000 insect species. Different animals found in this region include lions, leopards, bears, Hyenas, Jackals, Wild boars, Chinakaras, Sambar, Chital, Crocodiles, Cobras, and Eagles etc. Major plants and trees found in Gir forests include teak species like Amla, Bahedo, Babul, Timru, sadad etc. Half of the regions’ plant species are teak variety only. The other non teak forest species like Amla, Timru, Kadayo, Simal, Khair, Dhavdo, Asundro etc can be found. As part of the aforestration project the state government has planted Prosopis and Casuarina across the coastal border.

One found across Northern Africa, Northern Greece and South West Asia, Asiatic lions were the ferocious species in the region. Before independence lions in the Gir region were hunted for pride by  the Nawabs of Junagadh. As the number of lions came down to a mere 12 in 1900 the protection of the lions has been taken up. By 1936 the number has increased to 250 in Gir area and the lions in the remaining areas vanished. In 1965 the area was declared as wildlife sanctuary and the lions were given protection. A breeding center was established at Sakkarbaug Zoo and almost 180 lions have been bred since then.

Safari at Gir Forests of Junagadh

The jeep safari at Gir forest is the most adventurous and interesting thing. The tour gives a clear glance of lions when they are on the prowl. The jeep safari is open throughout the week and needs prior permission from Sinh Sadan Forest Lodge Office. Best time in the day to go for safari is mornings and evenings.

The safari at Gir is of two types: Gir Jungle Trail and Devalia Safari Park. Devalia Park, ‘Gir in a nutshell’ is a 16 sq km fenced area where the lions, deers, leopards, bulls and other animals can be surely watched. Devalia park will be closed on Wednesdays.

How to Reach Gir National Park

The nearest airport to reach Gir National park is located at Rajkot which is 165 km away. From Rajkot, Gir can be reached by road which is just a 3 hour journey. The nearest railway station is at Junagadh which is 50 km away and Veraval railway station is 40 km away. The place is well connected by state buses and many number of local travels.

Best time to Visit
The best time to visit Gir forest is during mid-October to mid-June. Monsoons are the best time for bird watchers who can see wide range of migratory birds.